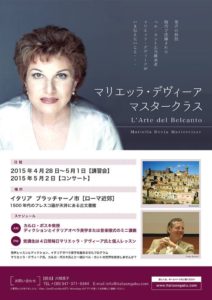 ◆Comments from participants
“With you I was able to study in a fresh and fun way. Nothing I’ve learned I could have received in Japan.”
Mayu Uchida

With you, I was able to study in a fresh and fun way. Nothing I’ve learned I could have received in Japan.
Before I arrived, I wasn’t sure I could understand and put these new teachings into practice. But then, when I attended the masterclass, I had the desire to try again and again what I was taught. Every day it seemed richer and more satisfying to me what I learned from Mrs. Devia and Professor Boschi. For example, the correct breathing technique and the richness of Italian poetry were two precious discoveries, never studied before in Japan.Thank you Maestra Devia, thank you Professor Boschi, thank you Satoko Kawabata!

“The masterclass was a very significant, precious and happy moment.”
Kanako Tominaga

There were so many meetings and lessons I could count on during the five days of the masterclass! In the morning, the lessons on the Italian language and the score, with Professor Boschi, and exercises on the control of breathing: it is only by exercising on the control of breathing that you can understand the correct movement of the diaphragm and the connection between the body and the voice.
I learned how important the preparation phase before singing is (the study is in the body).
The history of Italian opera and music are beautiful subjects and I would have liked the lessons to never end….
The lessons of the Maestra Devia made me understand how much I can work to improve my technique and find richer sounds in my voice. I had never been aware of it until now, but when I became aware of space and lips, I felt a sense of freedom in my throat. It was a very pleasant feeling when I set the position of the treble perfectly and could freely repeat it several times in each lesson. I have taken advantage of invaluable suggestions and now I must firmly commit myself to preserving and developing these teachings, even on my way back to Japan.
And then, I was able to visit the delightful city of Bracciano, admire the great Italian beauties, feel the wind of Italy and Rome, where the whole city is full of music and has become my own energy.
I feel really excited and indebted to this week of rich news. I am really happy to have participated in this unforgettable masterclass. 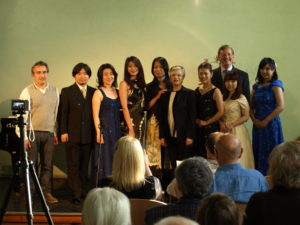