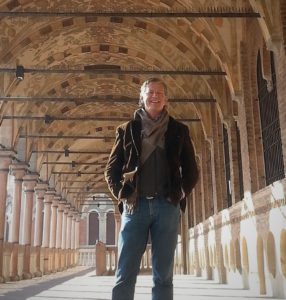 He holds a PhD in Italian literature at the University of Tor Vergata in Rome, and since 1986 he has been teaching History of Music and Musical Aesthetics at the “Alfredo Casella” Conservatory in L’Aquila. He previously held the same position at the “F. Morlacchi” Conservatory in Perugia and “G. Rossini” in Pesaro.
He has been a journalist since 1984 and has collaborated for 7 years with the daily newspaper “Il Messaggero” of Rome, as a music critic.
Director of the SuonoSud music quarterly, of the online classical music magazines Biblionet Musica and Alta Fedeltà – Classica.  Collaborator, for the classical music sector, with the monthly Alfabeta.
Co-author and guest in the studio of the television broadcast Alta Fedeltà – Classica for the television broadcaster SAT 2000. Creator of musicological transmissions for Rai, Vatican Radio, Radio della Svizzera Italiana. Collaborator, as music consultant, of the Vatican Museums.
After studying singing, at the Conservatory “F. Morlacchi” in Perugia and specializing in Bruges and Paris, he has given concerts in Italy and abroad with the “Gruppo Musica Insieme” and the “Ottetto Vocale Italiano”, with which he made recordings.

He is the author of the books: Angelo Mariani (Ravenna, 1988), Karlheinz Stockhausen (Milan, 1989), Proverbs and Controverbs (Otranto, 2011), Il Dissoluto punito o sia il Don Giovanni by Lorenzo Da Ponte for Wolfgang Amadeus Mozart (Vittorio Veneto, 2017). Several of his essays and musicological articles have been published by Italian magazines and periodicals.
Founding member of ISMEZ – Istituto per lo Sviluppo Musicale nel Mezzogiorno, he has organized and directed concert seasons, educational cycles and cultural events.
Appointed Italian head of the musical project of the European Community Romanticism in Europe, carried out in collaboration with the Conservatories of Music of L’Aquila, Warsaw, Strasbourg and Bucharest.

Member of the “Accademia Raffaello” of Urbino, of the Japan Musicology Society and of the Italian Society of Musicology.
He collaborates with the Japanese Society “Le Muse” for cultural exchanges between Italy and Japan, working alongside great artists such as Mariella Devia and Elizabeth Norberg-Schulz.
He holds conferences, masterclasses and seminars in Italy and abroad.