IN THE FOOTSTEPS OF VIOLETTA VALÉRY

In these weeks (every Thursday evening, until November 28), RAI 5 delights us with some rehearsals of La Traviata led by Riccardo Muti (https://www.riccardomuti.com/2019/11/07/muti-prova-la-traviata-su-rai-5/).
The recording was made in Ravenna, in the Dante Alighieri Theatre, on the occasion of the courses of the “Riccardo Muti Italian Opera Academy”: a group of young instrumentalists (the “Luigi Cherubini” Orchestra), singers, master accompanists and international conductors, previously selected and then involved in concerts and tours that, this year, have even arrived in Tokyo.

The episodes broadcast so far by RAI are, to say the least, exciting!
The depth of musical thought, the attention to the ingenious details of Verdi’s pages, the sensitivity towards the performers, the perfect technical and expressive conduct of opera singing, combined with the proverbial irony of Riccardo Muti offer an illuminating reading of the masterpiece. 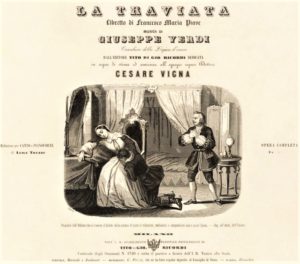 Title page of La Traviata, in the reduction for Canto and piano published by Ricordi.

Putting aside any modesty, I was humbly gratified to hear, in the directions of the great conductor, many ideas that we have taken and developed in the masterclasses of Le Muse. For several years, in fact, in addition to the exquisitely technical training, we offer singers insights into the nature of the characters interpreted and the essential understanding of the relationship between music and text in the literature of Belcanto.

Remaining adequately midget on the shoulders of a similar giant (the sublime Muti), I would try to reflect on some aspects of Violetta Valéry’s perhaps most famous piece, that “E’ strano…/ Sempre libera”, in which her nature struggles between idyll and thrill (Act I, scene five).
In the score it is defined as “scena e aria”: a complex picture, therefore, with changing emotional nuances in the expressiveness of the character.
Let’s consider that it is a sort of presentation: Violetta remains alone, at dawn, at the end of the party and reflects on her condition. By showing an inner state that, in a single word, is of total bewilderment. Bewilderment in the proper physical sense: lost, hesitant, in love with herself and Alfredo, on the abyss of an unknown heartbreaking (“croce”) and sublime (“delizia”) affection.
Even before the text declares all this in verse, Verdi drags us into Violetta’s labyrinth from the very first bars: the chromatic gap between the replayed Eb (“in core scolpiti ho quegli”) and the subsequent natural E, sung with an octave drop, on the word “accenti” already declares the screech of a seductive and painful contrast. 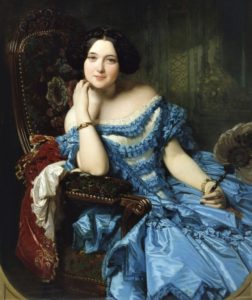 Federico Madrazo y Kuntz, Portrait of the Countess of Vilches, 1853

Even the choices of the musical tempo correspond to this staggering of Violetta’s psychology: from the initial 4/4, we pass to the 3/8 cradling in the representation of Alfredo (“Ah, fors’è lui che l’anima solinga ne’ tumulti godea sovente pingere”), we return to the 4/4 to blame the sentimental failure (“Follie!… Follie!..”), we throw ourselves into the whirlwind of 6/8 to shake off all ties (“Sempre libera degg’io folleggiare di gioia in gioia”), back on 3/8 with Alfredo’s voice off stage (“Amor è palpito dell’universo intero”) and, finally, in the “tail” we find the succession of 4/4 and 6/8. 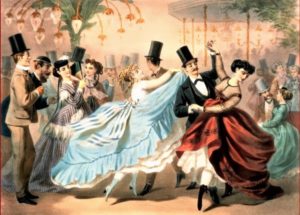 Without being able to exhaust in a blog the sublime characteristics of this musical piece, however, it is worth highlighting at least one other revealing passage.
On the verses “gioire!../ di voluttà…ne’ vortici perire”. Verdi does not limit himself to illustrating Violetta’s emotion, but through the thrill of the vocal blooms he throws us into the same whirlwind as the protagonist. And all the words in the text become even more premonition than description. The “vortice” looks like a symbol of Violetta’s destiny: it is now expansive and heady, so overwhelming and deadly, in the end.
What the Master of Busseto preached in a letter to his friend Francesco Florimo, “Go back to the ancient and it will be a progress”, we see here applied, with absolute originality. The close and necessary relationship between word and music becomes almost three-dimensional in this passage. It exploits the ancient principle of the Renaissance “madrigalisms”, that is the possibility to represent in sound form a visual or emotional element. And here the music becomes “vortex” and “joy” in the solitary blossoming of the song, with the orchestra “silenced” by the excitement of the protagonist.
This is how the ancient “madrigalism” can become a romantic expression, in this case even able to prophesy the fate of the protagonist.

Perhaps it is the melodrama itself, in such evocative and infinitely surprising works, that draws the “palpito dell’universo, dell’universo intero, misterioso, altero”. An act of Love, in short.
Thanks to Giuseppe Verdi, thanks to Riccardo Muti, thanks to the young interpreters of the Ravenna Academy: we are your travelling companions in the infinite discovery of “lyrical word”.