300 YEARS WITH THE COMMENDATORE LEOPOLD MOZART

There are little or no celebrated anniversaries, especially in Italy.
Musicians who slip into the shadows or are pushed into oblivion by the dominant figures of famous family members.
This is the case of Johann Georg Leopold Mozart, born exactly 300 years ago (November 14, 1719 in Augusta) and always remembered only for having generated and “built” the genius of his son, Wolfgang Amadeus. 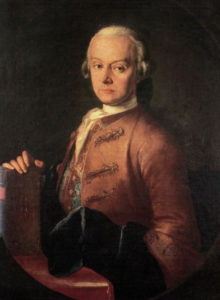 In this portrait, we see a man who is proud and, of course, aware of his own success. I would say that he “holds” his fortune: in the material sense… That book that shows us is his Versuch einer grundlichen Violinschule (Method for a detailed school of violin), reference manual for all violinists, translated into many languages and still today “croce e delizia” for many students. 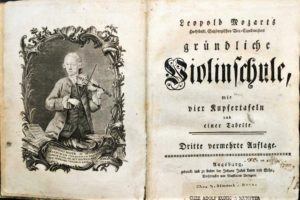 Title page of the Violinschule by Leopold Mozart (Augusta, 1756)

So, we are dealing with a famous man, an excellent musician, capable of great influence of character and style towards his children, both Wolfgang and Maria Anna.
1756 was a year of glory for Leopold. The publication of the Violinschule coincided magnificently with the birth of Wolfgang Amadeus.
The fame that the excellent Leopold deserves as Vice Master of the Chapel, his praiseworthy career as a teacher and performer will be put in crisis, a few years later, by the uncontainable graces of the divine child. 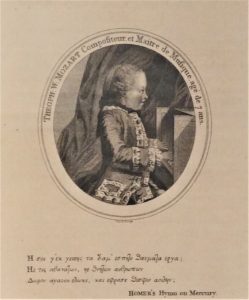 Printed portrait of Mozart at the age of 7, with quotation from Homer’s Hymn to Hermes. Vienna, Mozarthaus

Leopold fought against everything and everyone (including the Archbishop of Salzburg) in order to give international prominence to the talents of his two sons. At that time, every aristocratic court or salon was dreaming of these two enfants prodiges. The most important tournée of the Mozart family lasted three years (1763/1766), touching all the major European music centers. Three more trips to Italy followed, always organised by Leopold between 1769 and 1773, with unfailingly extraordinary results.
Behind this childish nomadism, many saw a vexatious and interested spirit from Leopold. Of course, compared to the protection we offer children today, these long journeys seem to be enslaving. But behind Leopold’s firmness, we can see a prophetic foresight.
Thanks to these grands tours, not only was Wolfgang known everywhere, but even more so, he knew everyone! Above all, he met the greatest musicians of his time (with whom he often competed), thus building his own wisely syncretic style. 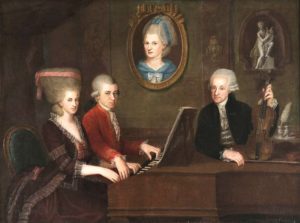 Leopold was a conservative. Like many fathers, he was careful to counter the revolutions of his children.
He had an easy time with Nannerl: she married Baron Johann Baptist von Berchtold zu Sonnenburg (none other!), gave up all concert ambitions (but was an esteemed piano teacher) and lived until the beautiful age of 78 years: more than twice her brother.
He was definitely worse off with Wolfgang ( thankfully).
Musical styles, work environments, marriage with the despised (from Leopold and Nannerl) Costanze Weber: everything seems to definitively separate Wolfgang from his father.
And yet….
Looking closely, in the most intimate and constitutive aspects of the psyche, they  remained very close. For sensitivity, for esteem and for deep consonance of spiritual belief.
Let’s consider the uninterrupted correspondence between Wolfgang and Leopold, the affiliation to Freemasonry in the same Lodge, the professional opinions exchanged without mincing words (Wolfgang knew how….).
Everything certifies the greatness, gruff and beneficial, of this father; his acting in perfect good faith for the opportune success of his brilliant son. But between them, the very sense of the Opportune diverged: for Leopold the present appeared opportune, for Wolfgang opportune was the Future of which he became oracle. 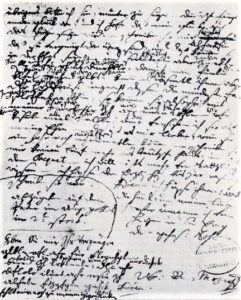 Wolfgang’s letter to his father announcing his dismissal from the service of the Archbishop of Salzburg, Prince Colloredo.

Leopold died on 28 May 1787 in Salzburg. A few weeks later, Wolfgang began composing Don Giovanni, where just happens that the story revolves around the death of a Father (the Commendatore). For the Commendatore (or rather, for his spiritual appearance in the form of a Statue), Wolfgang invented Future Music. In Act IV, the Statue’s warning “Non si pasce di cibo mortale / chi si pasce di cibo celeste”, for the first time in history, sets all twelve octave sounds in the same musical phrase. Of these, ten are in the Commendatore’s chant (the other two on cellos and double basses): a chromatism that really speaks of another “sound food”.
A dead Father, a Spirit of the Underworld, a music never heard before. Fortuitous coincidences? 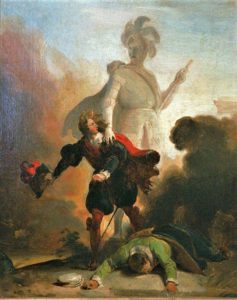 Can we dream of a hidden homage to Leopold, in Wolfgang’s most “subversive” work?
I would say so, since the words of this very intimate letter also resound in the dream: “Since death (if you look closely) is the ultimate end of our lives, for a couple of years now I have become so familiar with the truest and best friend of man, that his image not only no longer has anything scary for me, but also gives me a lot of peace and comfort! And I thank my God for giving me the good fortune to get the opportunity (You mean me) to learn about it as the key to our happiness.”
Illuminated phrases, written by Wolfgang at the news of the worsening of Leopold’s condition. Secret and touching phrases: they paint us the imposing human and professional stature of that father who nourished in his son the voice he lacked. The voice of the visionary genius.

A warm greeting and goodbye to the next chat.
Carlo Boschi
blog@lemuse.or.jp