DEBUSSY ILLUMINATED BY THE LAND OF RISING SUN

There are fashions that become viral obsessions.Our time is full of it: we are immersed in delicious superfluous needs.
Sometimes, fortunately, these epidemics are anything but harmful. On the contrary, they open our eyes to unknown worlds.

This is the case of the unbridled passion for Japanese art that ignited Europe between the 19th and 20th centuries: “Japanism”.
The leaders, needless to say, were Paris and France as a whole.
Any numbers? Between 1870 and 1881 (eleven years of activity), the main Parisian antique dealer sold 157,000 Japanese prints. And, of course, the competition was no less…
That is to say, every respectable living room in the Ville Lumière exhibited dozens of works by Hokusai, Hiroshige, Utamaro and Kunichika. 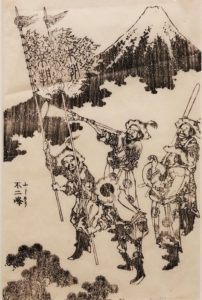 It all began in 1856, with the import of some drawings (Manga) by Hokusai: a small taste for the great binges of the following decades.
In the two universal exhibitions of 1889 and 1900, the Japanese stands registered an extraordinary turnout and Japanese goods became the most sought-after on the market of works of art.A common pastime among French writers: writing a brief autograph thought on a Kakemono (silk painting to hang on the walls) and keeping it on display in the living rooms, to testify to their adherence to “Japanism”. 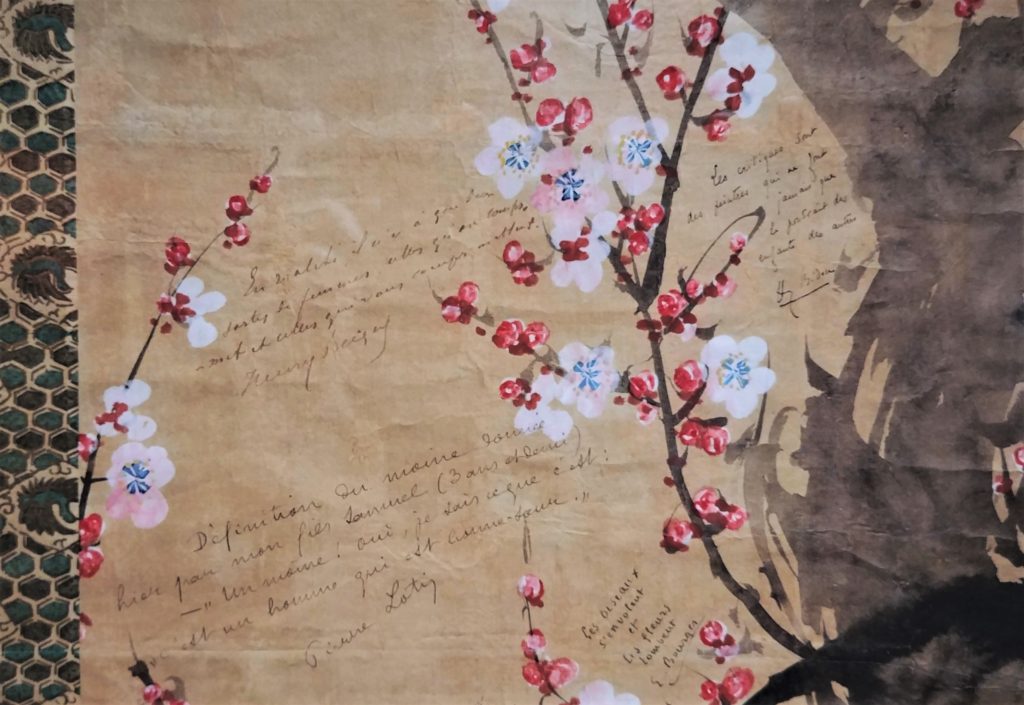 Signed notes of writers on a Kakemono. (Pierre Loti, Élémir Bourges, and others)

An exciting competition was held between the greatest artists of the time in the collection of Japanese prints. Monet, Manet, Beaudelaire and, last but not least, Claude Debussy, are prominent names among the dozens of Ukio-e (“The floating world”) fanatics.
The furniture, the fabrics, the clothes, the decorations, the architecture, the collecting, all speak that allusive and symbolic language of the Rising Sun.
A bestseller of the time was the splendid novel Madame Chrysanthème by Pierre Loti (1888), the story of a long stay by the author (with a temporary marriage!) in Japan. The book was also the first source of inspiration for Giacomo Puccini’s Madama Butterfly (1904). 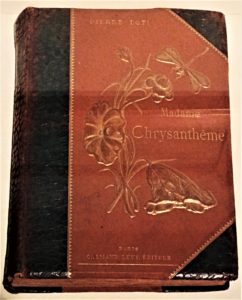 This appreciation of the elusive of the “floating world” inspired Claude Debussy with ingenious originality. Of course, he was not the only one: in 1871, Camille Saint-Saëns had already composed La Princesse jaune, a melodrama in which the young protagonist delights in love fantasies in front of the woodcut of a Japanese princess.
But Debussy was undoubtedly the author closest to the allusive spirit of Japanese art.
The vague, mysterious and evocative characters of Oriental works had a decisive influence on his style.
The use of full tone scales, so common in Japanese music, marked the original and revolutionary language of many of his compositions. One of the most famous orchestral works, La Mer, displays on the cover a detail of the famous Big Wave off Kanagawa by Hokusai. And, again, his invigorated collection of Japanese prints is reflected in Estampes, a collection of three short piano jewels, the first of which is titled (look at that…) Pagodes. 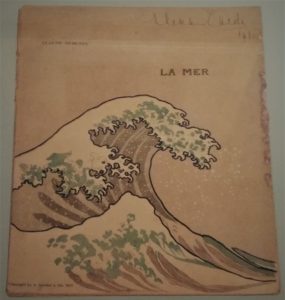 But, more generally, it was the symbolist style of Japanese culture that indelibly marked Debussy’s production.
Sho-Cho, the Japanese term for “symbol”, means “representing in a certain form something wider”. A concept dear to Debussy and to the poets who inspired him: Charles Beaudelaire, Paul Verlaine, Stéphane Mallarmé.
Just think of the titles of some of his works: Steps on the snow, Apparition, Night of stars, Reflections in the water, And the moon descends on the temple that was, etc.
And then consider how much his music lives on allusions, suggestions, continuous thematic variations and infinite timbre nuances.
In short, in the ancient traditions of a remote East, Debussy finds the key to renew, with absolute genius, the European musical language.

And he was amply rewarded with a triumphant reception in Japan. In 1925, a few years after his death (1918), the pianist Henri Gil-Marchex presented some of Debussy’s works in Tokyo: the success was enormous and practically all the young Japanese composers declared their debt to the ethereal and carnal art of the French Master.

For those interested in this extraordinary period of contact between Europe and the East, I would recommend a visit to two exhibitions currently underway:
in Rovigo ( http://www.palazzoroverella.com/mostra/giapponismo/ ) and Milan  (https://www.mudec.it/ita/impressioni-d-oriente/ ).

A warm greeting and goodbye to the next chat.
Carlo Boschi
blog@lemuse.or.jp