In recent years, I have devoted much of my studies to the shining and mysterious world of operatic arias.
In particular, to investigate what secrets are kept in the fertile folds of lyric poetry, poetry fertilized by music and transfigured into belcanto.
Among all the wonders that have moved, amused, terrified or exalted me, I would like to stop on a small jewel, set in the shining tiaras of Le Nozze di Figaro and, often, overshadowed by them.
It is the “Cavatina” (so defined in the score) “L’ho perduta… me meschina!”, inserted at the opening of Act IV. Here the little Barbarina despairs for having lost a brooch entrusted to her by the Count d’Almaviva. That brooch was supposed to arrive to Susanna to confirm her appointment at night “under the pines of the grove”.
“L’ho perduta…. me meschina!… / Ah, chi sa dove sarà? / Non la trovo… E mia cugina… / E il padron, cosa dirà?”
Reading these few verses by Lorenzo Da Ponte we imagine an almost comic sketch, compacting, with a good-natured look, the naive distraction of a teenager. And instead…
And instead Mozart takes charge of the situation and transports us into an atmosphere full of pathos, almost dramatic, decidedly oversized, compared to the situation.
How does this fascinating incongruity arise and justify itself? 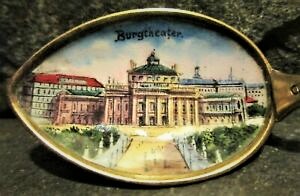 The Burgtheater in Vienna, where the first performance of Le Nozze di Figaro took place, in an enamelled miniature, on a silver spoon from the end of the 18th century.

First of all, it is striking the choice of F minor as the tonality of the piece, exceptional both in the Nozze and in the whole Mozart catalogue. A melancholic intimacy reinforced by the discretion of the orchestra, reduced to strings alone, subdued support and dialogue with Barbarina’s singing.
The course of the “Cavatina” is that of a nursery rhyme / lullaby: a cradle to comfort (6/8), with a very simple and celestial melody that remains within a single octave, just as it would happen in a childish consolatory song. All the “upbeat” attacks speak of Barbarina’s anxiety, of his distress in a fruitless search; and so does the phrasing, almost always short and broken by pauses. 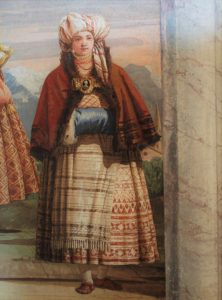 Delightful is the choice to end the piece on the dominant (C major): the lack of “resolution”, is a mirror of the failure to find the pin. Moreover, dramaturgically, this harmonically “suspended” interruption corresponds to the sudden arrival of Figaro and Marcellina (“Barbarina, cos’hai?”).
Finally, the position at the opening of the act gives the piece a particular relief: can we perhaps compare it to the Cavatina of the Countess “Porgi, Amor, qualche ristoro”, at the beginning of the second act? Do the discouragement of the gardener’s daughter Antonio have the right to similar relief as those of the Countess? (Moreover, she is also a simple ennobled Rosina).
It should be considered that, on that miraculous 1st May 1786, Barbarina’s interpreter was the very young Anna Gottlieb: a twelve-year-old girl with a celestial voice who, five years later, in Die Zauberflöte, also played the role of the first Pamina.

This reveals the character’s psychology, as Mozart and Da Ponte intended it: a female counterpart of the adolescent Cherubino (as well as his erotic companion and aspiring wife). In Barbarina, shamelessness and fear, cunning and naivety are mixed together. Her restlessness, her aspiration to show herself much more adult, the feverish alternation of opposite emotional states fully justifies her disconsolate prostration at this juncture.
Having lost such an important “pledge” for the Count (and for the plotting of Susanna, his cousin), could really reveal tragic, for a 12-year-old girl. And the grace of Mozart and Da Ponte leads us to the heart of this tender “childish tragedy”. 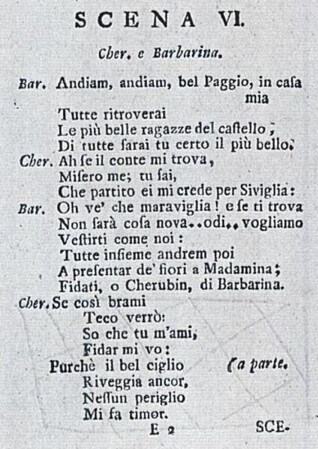 Could we also consider it a small gash in the veil of Mozart’s psychology? A movement of empathy with the “meschina” Barbarina, a theatrical mirror of the “petty” adolescence spent by Wolfgang, torn between age and international duties, between eccentricity and social expectations, between visionary qualities and conservative courts? This could be one of the keys to share Mozart’s understanding and emphasis on Barbarina’s feelings.
On the other hand, in his catalogue, we find other similar moments of sublime abstract enchantment. For example, the trio of Donna Anna, Don Ottavio and Donna Elvira “Protegga il giusto cielo” / “Vendichi il giusto cielo”, in Don Giovanni (Act I, scene XIX) or the other trio of Fiordiligi, Dorabella and Don Alfonso “Soave sia il vento” in Così fan tutte (Act I, scene VI).
In these lightning bolts of “augmented reality” the Mozart’s prophecy is hosted: every feeling, even the most humble and daily one, constitutes a door to access beauty. It is enough that it manifests itself freely, in the perfection of its lyrical expression.

A fond farewell friends, so that we may meet again as soon as possible.
Carlo Boschi
blog@lemuse.or.jp
SUBSCRIBE to LE MUSE BLOG