Those who love music, arriving in Verona rushes to buy a ticket to the Arena: perhaps to see Tosca kill herself in the middle of Roman walls, as old as those of Castel Sant’Angelo!But here in Verona, music has a widespread importance and lives in many corners of this magnificent city, not only in its monumental amphitheater, with his popular opera season.A delightful tour of the (stupendous) churches and the (sumptuous) Museum of Castelvecchio reveals some secrets that I would like to share.

Let’s start with the musician angels. They have been playing and singing since the Creation (so much for the deafening Big Bang). Ciaramella and triangle, for example, must have existed already in the Earthly Paradise, at least in the imagination of Renaissance artists.

And on earth? It was not in silence. One of the main commitments, under the vaults of these splendid architectures, was singing. Choral singing, the one that cures the soul and harmonizes the differences.
The exuberant fantasy of polyphonies is reflected in the construction of the seats where the singers used to sit. 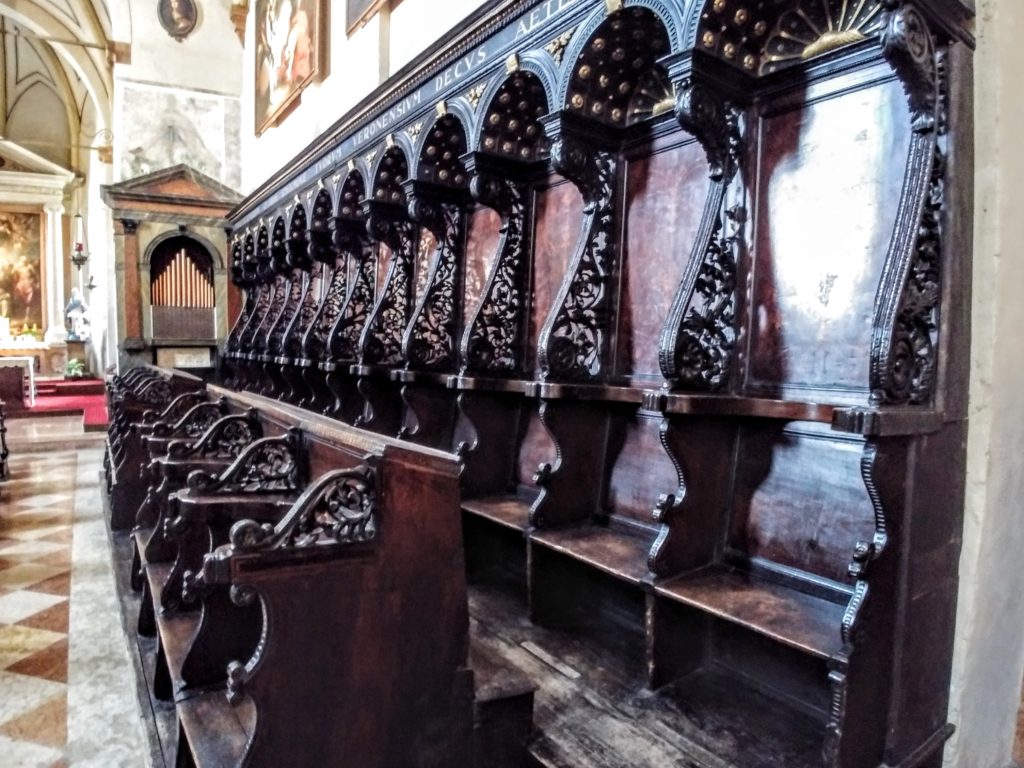 Outside the churches, in the medieval and renaissance courtyards, the walls of the palaces made it clear how precious and familiar the art of sound was. A sensual and salvific art.Prosperous maidens were portrayed as modern incarnations of the Greek Muses. A show in a show: do you musicians, who play on real instruments here, want to compete with mythology? Do you want to recreate in these rooms that golden age without time?

What about Orpheus? Could the miraculous singer be missing in this geography of Verona’s music?Of course not! Here then is painted, in a curious picture-manga, all his “biography”. Orpheus who seduces beasts with a harp, loses his beloved Eurydice, redeems her from beyond the grave with “la voce sua soave”, loses her again and, finally, is torn apart by the Maenads for having refused any relationship with the fair sex. 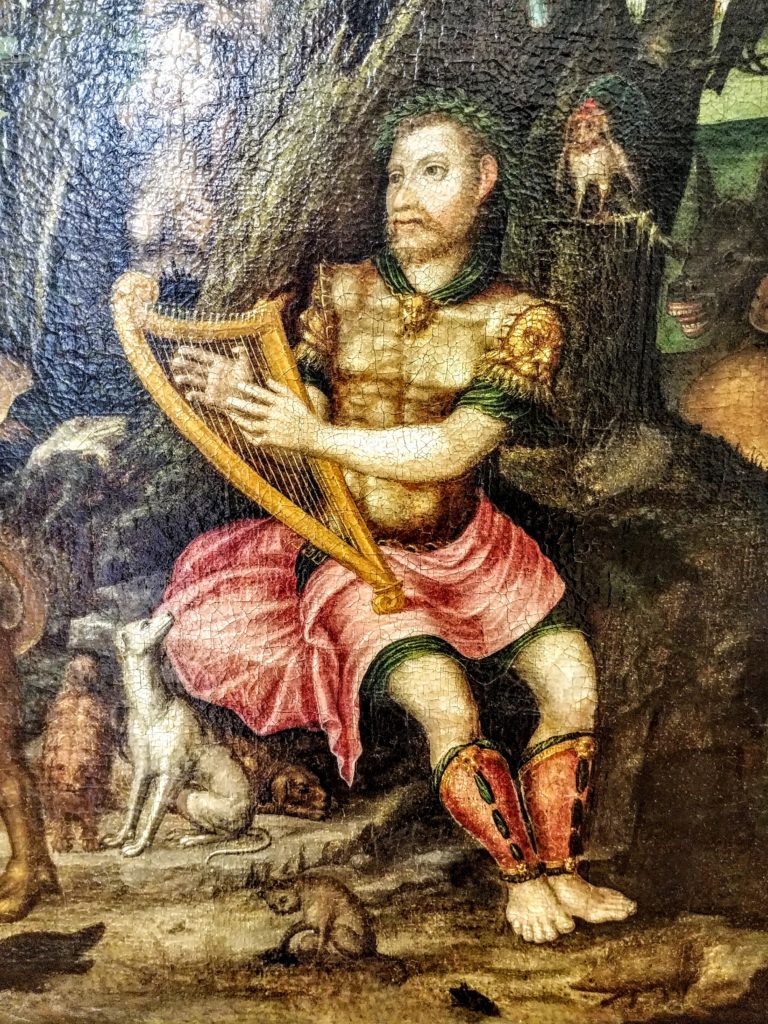 In the same years, a few kilometers from here, in the court friend / rival of Mantua, Orpheus lived the brightest incarnation: the one that gave Monteverdi putting to music (sublime) verses by Alessandro Striggio. The musical world was no longer the same. The Muses spoke to us again in harmony, with lyrical voices, from the tables of a stage. In Monteverdi’s L’Orfeo, at the opening of the curtain, the goddess Musica majestic appears. As in this small painting, also preserved in the Verona’s Castelvecchio. 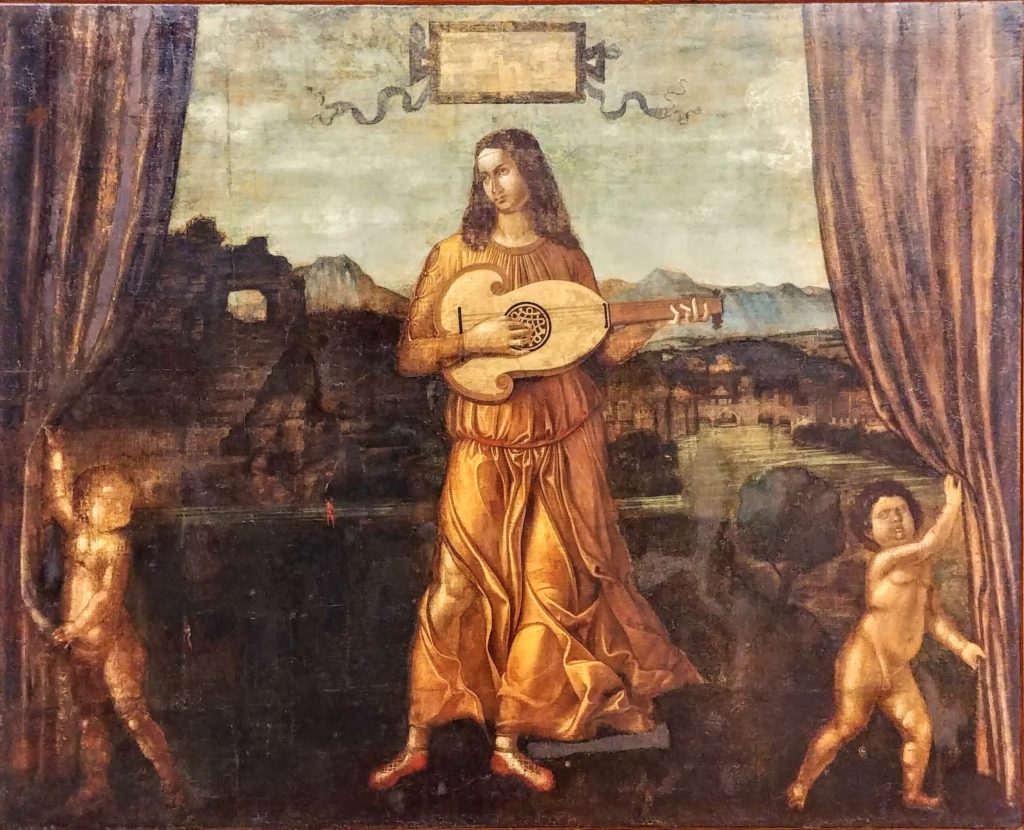 “Io la Musica son, ch’ai dolci accenti / so far tranquillo ogni turbato core”, sings the Music of Monteverdi.
Wise words! In Verona, in Mantua and wherever you are.

Montserrat Figueras in the role of Music, in L’Orfeo by Claudio Monteverdi, director Jordi Savall, Barcelona 2002.