“When they say that Neapolitan singing is popular, we feel that something is out of tune…”
No, it’s not the same article as last week!!!!
Same beginning, but different point of view: will this feeling be true also from a different perspective?
If we agree that the influence of the Neapolitan repertoire on the most “cultivated” compositions of the nineteenth century is remarkable, can we believe that the opposite is also true? How is it that so many elements of the most erudite music manage to creep into small Neapolitan masterpieces?
An essential presupposition, for such fertilisation, lies in the fluidity of that urban social fabric, especially in the second half of the nineteenth century. Compared to other European cities, the permeability of social classes is striking, both on an expressive level and in cultural exchanges.
The remarkable industrial expansion, the international artistic relations (with the resulting fashions), the role of publishers and printers, capable of occupying the music market in a capillary way, are only some of the elements that promote this happy dialogue. 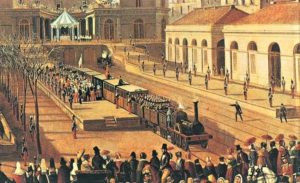 The whole of Naples, in particular, is invaded by “copielle” and “fogli volanti”, agile printed editions that propose the lyrics and, at times, even the melodic line of the songs. They are sold at every street corner and they have amazing circulation. Just to give us an idea, in 1839 one hundred and eighty thousand copies for Te voglio bene assaje and, in 1880, one million copies for Funiculì funiculà!!
The poet Giuseppe Regaldi (a sort of Italian George Byron…) wrote in 1847: “at every occasion of a new event that touches the soul of the people, a new song appears, which silences its sisters and takes the dominion of singing voices and musical instruments. There are non writings, in the Kingdom of Naples, of which copies are printed and sold in such number, what happens every day of such songs”. 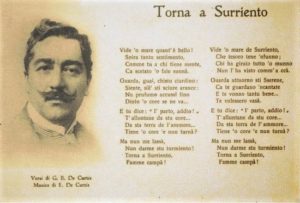 “Copiella” of Torna a Surriento (1894), with text and portrait of the poet Giambattista De Curtis.

This street literature feeds, then, the virtuous habit of the so-called “Periodiche”, salon meetings that are organized both in the houses of the good bourgeoisie and in the more modest houses. But they all have in common a spectacular character made of songs, spots, dramatic recitations, concerts and dances. Of course, with interpreters proportionate to the economic availability of the organizers.
And it is here, above all, that the listeners themselves see songs from the great international repertoire and native compositions alongside each other.
In the best circles, among these listeners we also find the excellent authors of Neapolitan singing: great poets like Salvatore di Giacomo or Ferdinando Russo and, among the composers, the famous Mario Costa, Vincenzo Valente and Ernesto De Curtis. Naples, Interiors of the Caffè Gambrinus, inaugurated in 1860.

But the figure of connection between salons and street, between history and music, between song and melodrama, between Naples and Europe was certainly Francesco Florimo.
His role as a composer, while appreciable, takes second place to the work of selection, collection and rewriting of existing “popular” repertoires. Their enrichment (in the classical sense) emerges from the nine collections of traditional music, arranged by the wise and cultivated hand of Francesco Florimo. His twenty-year role (1844-1864) as Librarian and Archivist in the Conservatory of S. Pietro a Majella put him in contact with the immense heritage of masterpieces (many still unpublished today) collected there.  And from this frequentation, from the severe studies made with Nicola Zingarelli, from the fraternal friendship with Vincenzo Bellini a new style of Neapolitan singing was born, made of expressive enhancement of poetry and refined harmonizations. 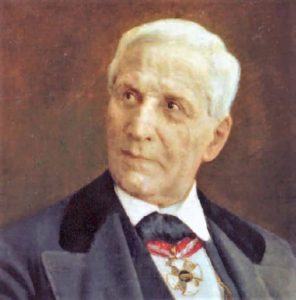 From the shining example of Florimo, the famous creations of the second half of Neapolitan nineteenth Century  and authors such as Ernesto Murolo or E. A. Mario, Francesco Paolo Tosti will make “classic” and very refined a song that, without fear of denial, we can approach the European lieder production, only apparently more emblazoned.

A fond farewell, my friends, so that we may meet again as soon as possible.
Carlo Boschi
blog@lemuse.or.jp