When they claim that Neapolitan singing is popular, we feel that something is out of tune…
Yes, its “oral” origin is true, without recognizable authors. But, soon, the commercial organization took possession of it, making it the object of irremovable publication and recording.
Thus, the boundary line that has always separated authentically folkloric art from the mainstream art is crossed: the modifiability of repertoires is lost, indispensable and free in the popular sphere, vice versa limited or cancelled in signed and protected works.
In a few decades, after the mid-nineteenth century, the unpublished repertoire, widespread in the neighborhoods and countryside of Naples, becomes “song”, i.e. standard form, increasingly bound.
In 1865 the final step was taken, with a law that guaranteed protection to authors and publishers: it was enough to note down a melody heard in the street and you automatically became the creator of that song. 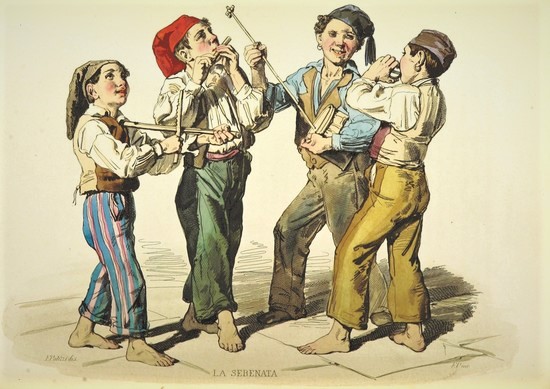 Anonymous The Serenade, printed around 1830.
Instruments represented, from left to right, the sceta-vaiasse, the sisco, the caccavella and the scacciapensieri.

The most controversial case of these years, perhaps the most sensational case of all 19th century music, is that of the famous Te voglio bene assaje. If there is now certainty about the author and the date of composition of the text (1835, Raffaele Sacco: a famous optician and equally renowned lyrical improviser), the melody, however, still struggles to find authorship.
An overwhelming success in the streets of Naples, brings the tune to triumph in the 1839 edition of the Piedigrotta Festival. And in 1840 Guglielmo Cottrau published the first version printed with the title Nuova canzone napoletana by an anonymous author.
Vincenzo Bellini’s pen is immediately identified behind those notes, given the real similarities with Rodolfo’s aria in La Sonnambula “Vi ravviso luoghi ameni”.
But Bellini was dead and, on the contrary, Donizetti, triumphant in Naples with 17 new works in the years between 1822 and 1838, seemed the right authority to find behind the very sweet and penetrating motif of the song. The attribution was corroborated, thirty years later, by the greatest Neapolitan poet, Salvatore Di Giacomo, without any proof, if not a confidence of Raffaele Sacco’s great-nephew…!?
Others proposed the name of a minor pianist (regular accompanist of Raffaele Sacco’s performances), Filippo Campanella. Today it is considered possible that the publisher himself, Guglielmo Cottrau, wrote the music of this little jewel, mysteriously anonymous and timeless. 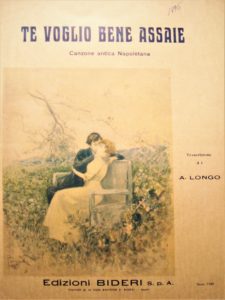 It was Guglielmo Cottrau (French by birth, but Neapolitan for biography and feelings) who started the extraordinary publishing machine that allowed the Neapolitan singing to fix itself in the organic repertoire and spread widely through the social strata.
It was in 1824 that the first volume (followed by five others) of the Passatempi musicali appeared, in which Neapolitan songs of ancient and recent composition were collected. Some of them are put in notation for the first time. So it happens, for example, with Tu ma’aje promise quatto maccatora. Canzona di lavandaja, handed down since the 13th century. 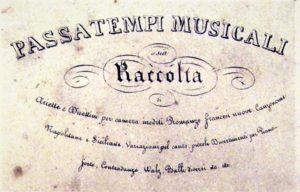 Cover of the original edition of the Passatempi Musicali, Napoli 1824, Cottrau publisher.

Thanks to the Cottrau family, Neapolitan singing crossed the borders of the Kingdom of the Two Sicilies and even those of the Italian territory.
Guglielmo’s sister, Lina Cottrau Freppa, moved to Paris. She was an appreciated singer and animator of a literary and musical salon, frequented by the most refined intelligentsia. Among them, Chopin, Bellini, Rossini, Liszt, Hiller. Just the great pianist Ferdynand Hiller, wrote about Mrs. Cottrau: “…she had an extremely sonorous voice, even if not powerful, an excellent method and with her performances of Italian folk songs she fascinated even the embarrassed frequenters of Italian opera. In her house, music was discussed, sung and played, and then again discussed, interpreted and played. Chopin and Mrs. Freppa both alternated on the piano and I did my best too”.
These highly authoritative ambassadors were the first to advocate the diffusion and appreciation of Neapolitan melodies, to the point of succumbing themselves under the charm of this overwhelming creativity.

Scene of Tarantella, from an early 19th century print.

From these musical Evenings in Lina Cottrau’s salon, blossoms, for example, La danza per voce e pianoforte by Rossini (1835), a furious Tarantella on a text by Carlo Pepoli (better known as the librettist of I Puritani, with music by Bellini).
And, from this, descend both the Tarentelle napolitaine in G major by Franz Liszt (1838) and the Tarantella in A flat major (1841) by Fryderyk Chopin, both for piano.
Robert Schumann described the latter as “Chopin’s most extravagant way: we see before us the dancer, whirling as if he were possessed, until our senses waver. Of course, no one could define this music as lovable, but we gladly forgive the maestro his wild imagination. Is he not allowed, once in a while, to show the dark side of his soul?”
The Neapolitan chant had reached heaven and found sacred tutelary gods.
But we are only just beginning…

A fond farewell to all friends. I hope to meet you again as soon as possible.
Carlo Boschi
blog@lemuse.or.jp
SUBSCRIBE to LE MUSE BLOG