Dear friends, today we conclude our visit, in the Vatican Museums, to Raphael’s frescoes for the Room of Heliodorus.
With the previous articles we tried to investigate the overall project of the work (https://lemuse.or.jp/it/blog14-boschi/) and then explored the first two painted scenes: The Expulsion of Heliodorus and the Miraculous Mass of Bolsena (https://lemuse.or.jp/it/blog15-boschi/).
Let’s imagine, now, to return to the centre of this “visual score” and continue reading the composition in the following episodes.
The meeting of St. Leo the Great and Attila (completed by Raphael in 1513) evokes the persuasive power of Pope Leo the Great, capable of dissuading Attila and his Huns from invading Italy in the 5th century. In Raphael’s intention, the pontiff’s authority is reinforced by the intervention of Saints Peter and Paul, armed and suspended in the air, just like the angels looming over Heliodorus in the painting in front.
We are still faced with an episode of “escaped danger” for the Church: a celebration of strength that will be bitterly denied, fourteen years later, by the Sack of Rome, by much more cruelly determined barbarians: Charles V’s Lansquenets. 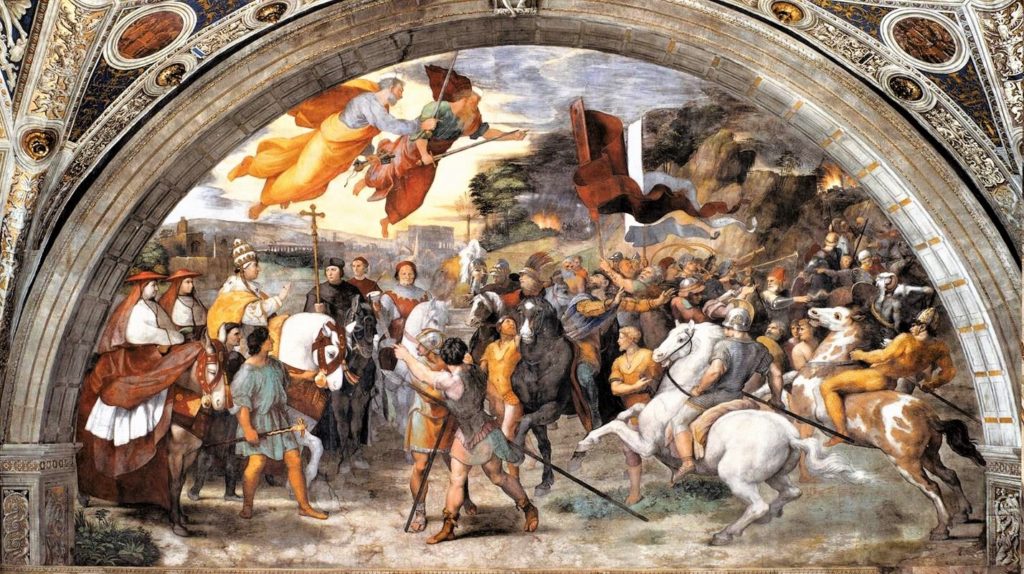 Raffaello Santi,  The meeting of St. Leo the Great and Attila, 1513. Vatican City

As in the Expulsion of Heliodorus, here too there are two sectors (two choral sections) rhythmically opposite: on the left, the compassed and hieratic ensemble of the papal procession; on the right, the agitated turmoil of Attila’s troops.
The pontiff’s solemn advance sounds like the melodic line of a tenor: a guide for the counterpoint of the other voices/characters. Considering that the tenor‘s voice is often taken from Gregorian chant, the figure of Leo the Great perfectly embodies its religious and musical nature. Here, in the features of the ancient pontiff, the portrait of his contemporary Leo X Medici stands out, even represented twice: as cardinal and as pope.
Higher up, as a guarantee and protection, the two saints rise, not by chance patrons of Rome and founders of the Church. They came to strengthen the line of the tenor, intoning it to higher octaves, even more ethereal and penetrating. 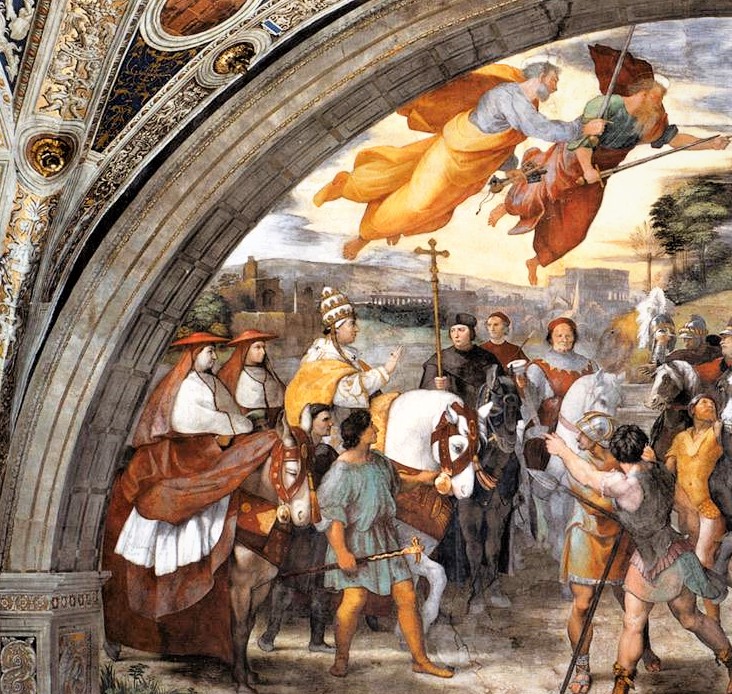 In the centre of the fresco and to the left, the figures assume, on the other hand, swirling poses with respect to the sobriety of the tenor, like emotional warbles and chromatic blooms.
The figure of Attila stands out, snaking in explosive plastic melisma. His movement dominates, physically and ideally, the agitated and unaware mass of his retinue. It is his terrified song in front of the impassable power of Pope Leo: Terribilis est!
His melodic gesture is visually confirmed, imitated and amplified by the horses on the right.
As in Eliodoro’s scene, here too we have the contrast between two sections, opposite for timbre, rhythm and melody, on both sides of the wall. Their sublime figurative conciliation is the result of a harmonic science in everything similar to the musical one. And here we are, finally, at the Liberation of St. Peter, completed by Raphael in 1514.
We read the painting starting from the left below and immediately that spiral motion already so engaging in the other frescoes appears: the soldier on the steps screws himself sitting, still incredulous, half asleep. His hands fall back under his outstretched arm in the standing guard. And this officer in the foreground, portrayed from behind, indicates the central scene of the fresco, the real “miraculous liberation The cell and its grate, the guards and chains, Peter’s sleep have reason to exist only because they are illuminated by the angel, only to ensure the right relief to that radiant “hole” in which Peter’s awakening is prepared.
Immediately to the right, the apostle himself looks at us submissively and stupefied at the liberation that has taken place.  The keys he holds in his hand are the seal of a mission to come, but also of a redeemed imprisonment. His secret agreement with the angel is projected towards our point of observation: Peter’s gaze calls us as witnesses and heirs to such harmony. A pictorial harmony that is both sonorous and musical.
The glimpses of light (dux of the visual counterpoint) and their passing over the unsuspecting bodies (the comites), resonate as the necessary final cadence of the entire cycle.
The angel triumphs as tenor, decisive for the other voices: all of them suffer the dazzling magnetism, visual, musical and interior. Peter follows him meekly towards the exit from the fresco, in obedient imitation, human countermelody of the supernatural sound.Perhaps this is why Giorgio Vasari, in his Lives of the Most Excellent Painters, Sculptors and Architects (Florence, 1550) writes of this Raphaelesque masterpiece: “E, per cosa che contrafaccia la notte più simile di quante la pittura ne fece già mai, questa è la più divina e da tutti tenuta la più rara.” If the walls of Heliodorus’ room reveal themselves as a coherent contrapuntal composition, their effectiveness is completed by comparison with the frescoes (1514) painted in the sails of the ceiling according to a consequential arrangement.
The expulsion of Heliodorus descends from Moses in front of the burning bush, the Mass of Bolsena from the Sacrifice of Isaac, the Meeting with Attila from the Reconciliation between God and Noah, the Liberation of St. Peter from Jacob’s Dream. The images on the walls refer, even further back in time, to episodes taken from the Bible, in a game of chronological polyphonies of rare beauty.
Thus, the entire Room of Heliodorus manifests an immanent spirituality, through (or rather, beyond) time, in its eternal contemporaneity and consonance. Only in this sense, the paintings on the ceiling crown the great compositional project of the Room.
Lines, colours, perspectives, movements, proportions are polyphonies: their vibration goes beyond the physical limit of the place and the contemporary experience, embodying that Platonic Harmony of the Spheres that, inaudible, is generated in universal motion. 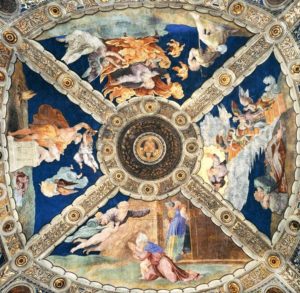 A warm greeting to all of you who are in love, like me, with music.
Carlo Boschi
blog@lemuse.or.jp
SUBSCRIBE to LE MUSE BLOG