Dear friends, as promised in last Saturday’s article, today we are approaching the frescoes that occupy the lunettes of the “Heliodorus’ Room” in the Vatican Museums, to discover how much music is present and alive in these masterpieces.
Let’s start with the painting that gives the name to the whole room: The Expulsion of Heliodorus, on the east wall. 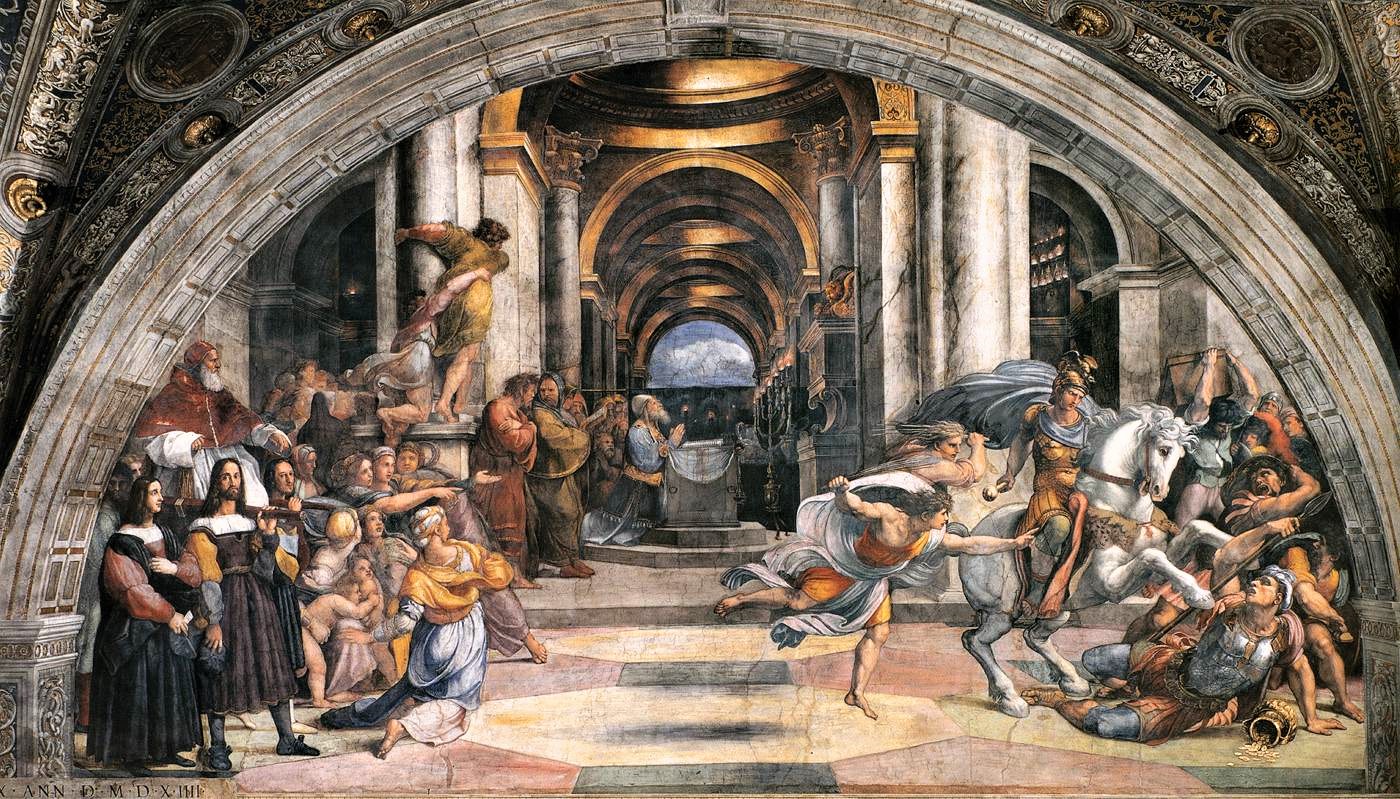 Raffaello Santi,  The expulsion of Heliodorus from the Temple of Jerusalem, 1514. Vatican City.

This amazing choral play of shapes and colours is built on a principle dear to the whole Italian Renaissance: the actualisation of Myth and History. The heroic figures of the past live again, as models and examples, in contemporary characters.
Therefore, on the left side of the fresco appears Pope Julius II. He is the commissioner of the work, but here he also witnesses the punishment (1700 years earlier!) of the minister Heliodorus of Antioch, desecrator in the Temple of Jerusalem.
This chronological short circuit speaks the language of musical counterpoint. One of the most widespread customs in the composition of sixteenth-century polyphonies, in fact, is the use of much older (often Gregorian) melodies to ” establish” the dialogue between voices. Even in music, therefore, past and present live a relationship of mutual necessity, just as happens in this and in the other frescoes of the “Heliodorus’ Room”. 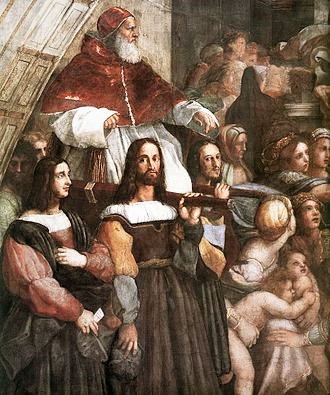 This close dialogue with the ancient is, then, one of the main reasons for Raffaello’s presence in Rome. We see him feverishly engaged in the first archaeological excavations, in the first museum collecting, in the copying and passionate study of such and so many wonders, so far hidden. An emeritus expert such as Claudia La Malfa, for example, points out the echo of classical figures in the postures of some of the soldiers represented in the “Heliodorus’ Room”. They would be representations derived from some Roman statues that emerged, just in 1514, in the Pantheon area.
Counterpoints of shapes that resonate through time…
Once the authoritative ancient antecedent has been established, in the musical counterpoint, the voices proceed by imitation and variation, with respect of the fundamental “subject” (the dux).
And here, in the figures of Eliodoro’s fresco, the same principles operate.
Variation, for example, is the winding of the woman’s body in the foreground on the left, imitated by the contortion of the man clinging to the column and prolonged at the top by the column itself. The images behave as embellishments of the main vocal line: “melisma” of several voices, vertical momentum towards the treble. 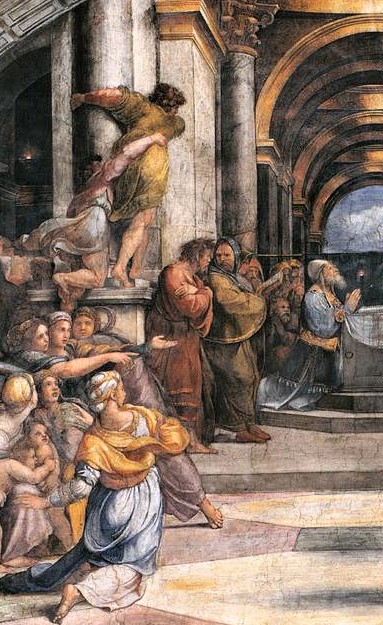 In counterpoint, however, the voices are also called to move in opposite directions.
Here is perfectly depicted this “inversion”, in falling terrified of the profaner Heliodorus on the opposite side of the fresco. His prostration, the sinking “to the deep”, under the pressure of the avenging angels, opposes the descending motion of these sinful figures to the ascending lightness that frames the side of Julius II.
The perfect symmetry between the two groups recalls the variation of the same dux, according to motions (postures) and timbres (colours) absolutely contrary. 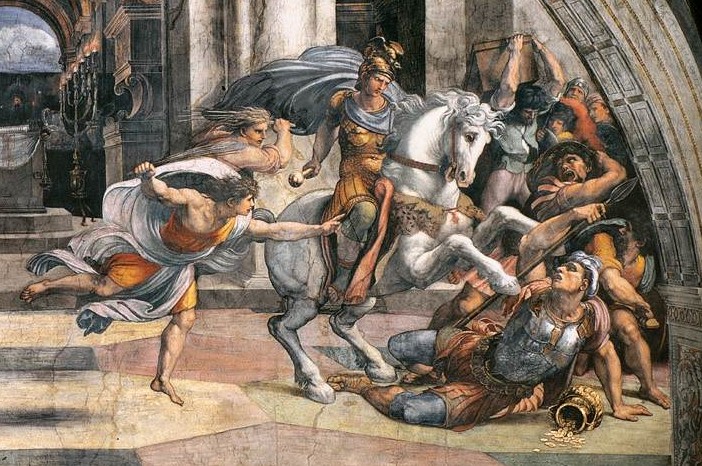 Raffaello Santi, The expulsion of Heliodorus(part.)

If The expulsion of Heliodorus intones an animated and lively counterpoint, on the south side of the room, a score of a completely different climate opens up. The lunette frames the scene of Bolsena’s Miraculous Mass, in which the figures and glances converge upwards towards the host, in turn caressed by the very silent light that descends into the temple. 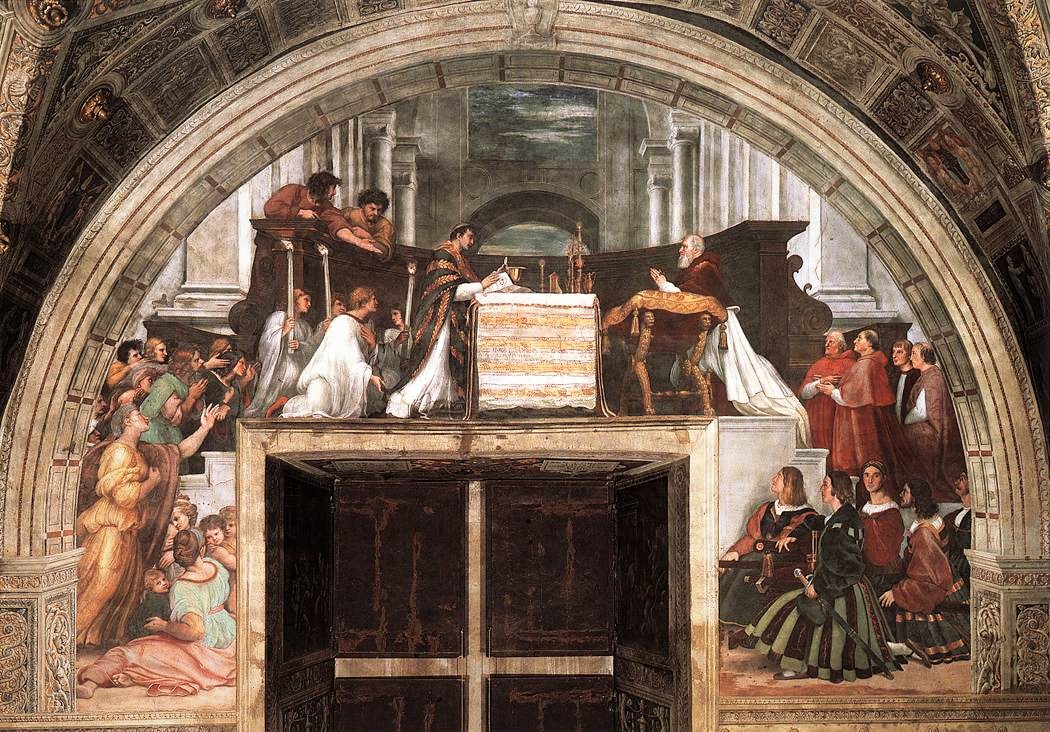 Here, too, but this time on the right side, Julius II is looking out, to sanction continuity with the miraculous episode of Bolsena in 1263, when a priest, doubting the physical presence of Christ in the Eucharist, saw some drops of blood gushing from the consecrated host. Next to the pope, prelates and dignitaries also counterpoint the “old-fashioned” figures on the left side of the wall. Following the scene from left to bottom, the screwing of the seated woman stands out, extending and expanding in the lyrical pose of the standing woman. These two throbbing “voices” are joined, in concordant polyphony, by the other adoring characters on the left side.
It is a real visual “crescendo” that culminates in the static central framing, where the priest stops to contemplate the host. There resounds a consonant agreement in which Pope Julius II participates, with an intense and authoritative gaze.
The converging looks of the Bohemian priest and the Pontiff mark the harmonic “resolution”, the perfect cadence of the score: voices in octave relation for a homophony indifferent to chronological distances. 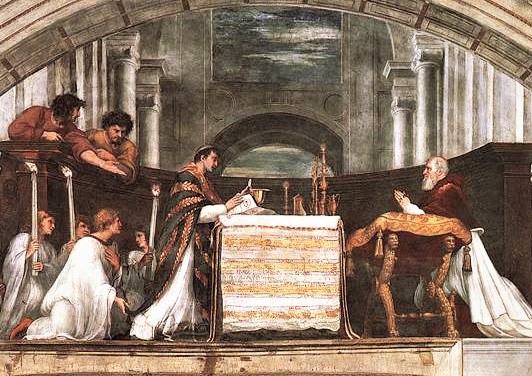 The wave of the movement, collected and sublimated by the two central figures, calms down in the group on the right, where even the colours (musically we would say the timbres) unify ministers and guards in an ascetic fixity.
Among these, Raphael’s self-portrait stands out, which, with his sight turned to the visitor, attracts him in the harmonious accord of this polyphonic score in the form of a fresco. 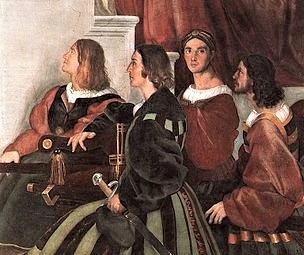 To complete the visit (and the listening!) of these masterpieces, let’s meet at the next article, where we will observe closely the sublime visual compositions of St. Leo the Great meeting Attila, the Liberation of St. Peter and the lunettes in the ceiling.

A fond greeting to all of you, in love, like me, with music.
Carlo Boschi
blog@lemuse.or.jp
SUBSCRIBE to LE MUSE BLOG