THE MUSICAL PAINTING OF RAFFAELLO part 1

For all art lovers, 2020 will be remembered as “the year of Raphael“: 500 years after the death (April 6, 1520) of the painter, architect, archaeologist, set designer that the contemporaries already called “divine”.
In the revolutionary simplicity of this (as, perhaps, of every other…) genius, technical and expressive solutions of dazzling originality nestle. And highly original is his figurative mastery, able to cancel the distances between traditionally distant arts, such as painting and music. In the measured composition of his works flows secretly the harmonious vocal counterpoint that, just in those years, is affirmed in all the courts of Europe 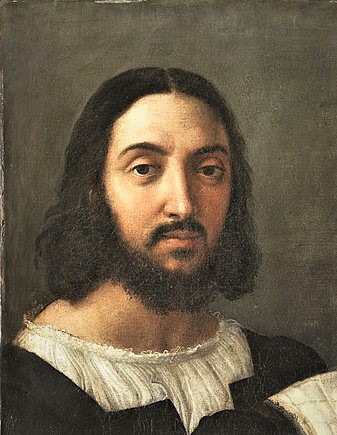 In the last years of his life, Raphael lives permanently in Rome, in the service of Popes Julius II and Leo X, the latter being the refined son of the even more refined Lorenzo de’ Medici.
Some of the greatest artists, men of letters and philosophers of the time lived at the papal court in a feverish and visionary exchange of ideas. Worthy of that utopia that, after half a millennium, is still very bright.
In such an exalting turmoil is placed the most extensive work, and acclaimed over the centuries, by Raphael: the frescoes of the four papal chambers in the Vatican Museums, now known as “Raphael’s Rooms”: the Room of the Signatura ( painted between 1509 and 1511), the Room of Heliodorus (1511/14), the Room of the Borgo Fire (1514/17) and the Room of Constantine (1520/24), completed by the disciples on the Master’s cartoons after his death. 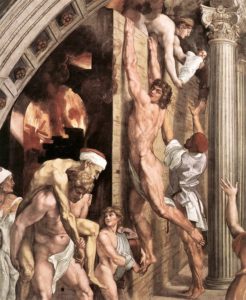 In particular, the Room of Heliodorus reveals a strong polyphonic character, both in the proportion of the figurative movements as in their clear harmonization. Its overall design faithfully reflects the musical production of that first fifteen years of the sixteenth century. A distinguished composer in Roman circles was the Carpentras (Elzéar Genet), chapel master in the Vatican from 1513 to 1522: in perfect coincidence, chronological and aesthetic, with Raphael’s presence in Rome. His style, like that of all contemporary musicians, was based on the rigorous mechanism of counterpoint.
And it is precisely from counterpoint, which provides for a continuous interaction between the voices, that Raffaello found inspiration to conceive the design of the Room of Heliodorus. The ambitious goal is to bring the temporal dimension of music into the spatial nature of painting. 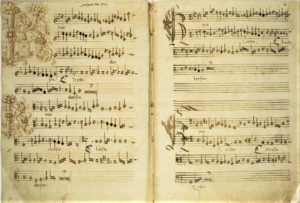 More properly, the musical counterpoint of the early 16th century is constructed from one or more “soggetti” (musical themes), taken from tradition or invented by the composer. The voice proposing the fundamental theme is called dux (guide), while the others are called comites (followers) and proceed by imitation and variation of the “soggetti”, on a melodic, harmonic and rhythmic level.

The four great frescoes in the Room of Heliodorus (one on each wall) also interact as voices of the same polyphony, all obedient to a single concept that constitutes the spiritual dux of the entire cycle.
The scenes represent different moments of the Christian tradition, apparently unrelated and independent: The expulsion of Heliodorus from the Temple of Jerusalem, The Miraculous Mass of Bolsena, The Encounter of St. Leo the Great and Attila, The Liberation of St. Peter. But, on reflection, the theme is unique and unique the “soggetto”, of which the four emblematic episodes are, in fact, variations and ideological confirmations, firmly united by the style of Raphael, “painter and composer”.
The main axis (the dux) of the fresco cycle is the power of divine action within human history.
Through the four episodes, distant in time place and protagonists, its strong relevance and moral value is affirmed.
A structure that once again refers to music: the same harmonious unity of distinct parts, we find it in central passages of the liturgy, such as the Mass or Vespers. 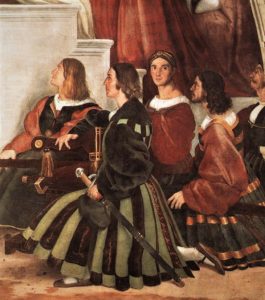 Each of the “movements” of the Room manifests a peculiar incarnation of the dux, according to a hierarchy of comites that are arranged in contrasts and consonances, each time surprising and harmonious.
The reading order of the frescoes, as well as that of a score, finds meaning in the rhythmic succession of episodes that envelops the observer and drags him in an alternating motion between the impetus of the Expulsion of Heliodorus, the recollection of the Miracle of Bolsena, the heroism of St. Leo the Great and Attila and the serenity of the Liberation of St. Peter. The observer, in the center of the Room, is at the junction of the two axes that connect the impetuous episodes (The Expulsion of Heliodorus and St. Leo the Great and Attila) and the contemplative ones (Miracle of Bolsena and Liberation of St. Peter).
Here, then, that the dux identified above has already produced two comites, two narrative rhythms that will generate other expressive differences within each scene. 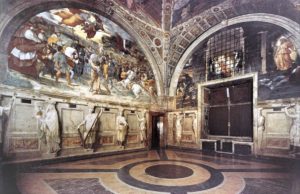 And just these expressive differences I would like to investigate in the next article, enjoying together every single scene and penetrating the miraculous coherence of such a pictorial-musical masterpiece.