Jacques Offenbach composes Orphée aux Enfers in 1858, with a libretto by Hector Crémieux and Ludovic Halévy (the same as Bizet’s Carmen).
In a letter he explains the method of his work: “When a melody does not satisfy me at first listening, I change it ten or twenty times, if necessary, before laying it down on the score, and the librettist will have to model the rhythm of the verses on the needs of my music. So most of the verses of the Orphée were conceived on the basis of my indications”. From this follows the habit of personally directing the productions, demanding an exorbitant number of rehearsals before the first performance. 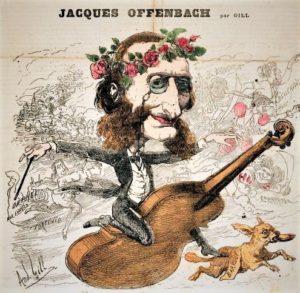 During this period, 25 musical theatres are operating in Paris. Among them, the much-loved Théâtre des Bouffes-Parisiens stands out, where this first opéra-bouffe (as the libretto calls it), a brilliant desecratory masterpiece, was born.Bouffes, in those years, were defined the Italian comic operas. But Bouffe, in Paris, is also the food, the meal. The reference to the eighteenth-century tradition of the Commedia dell’Arte is evident and coincides with the “popularising” nature of these new repertoires, which are also close to vaudeville and varieté.
On February 24, 1855, Offenbach wrote to the Minister of Finance: “I would like to play “arlecchinate”, pantomimes in one or more acts…, import the genre of Italian “Fantoccini” into Paris, modified according to the taste of the French public, and offer a completely new and original entertainment that will be of a kind to satisfy the cultivated intelligence and the mass of spectators”.
The new genre of music was immediately much appreciated, so much so that a Parisian critic prophesied: “The advent of opérette-bouffes must be considered a real benefit and M. Offenbach could one day be among the saviors of humanity”. 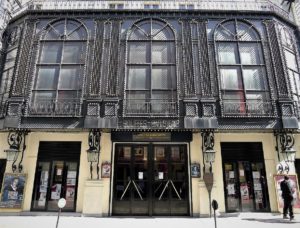 The Bouffes-Parisiens Theatre, today, in Rue Monsigny in Paris.

France is living a moment of excited grandeur, under the dissipated and efficient monarchy of Napoleon III. Offenbach perfectly interprets the rhythm and trend of the moment.
Another critic, Jules Clarette, wrote: “If you ever decide to create an allegorical picture of our time, do not forget, above all, to put at the top of our epileptic Sabbath, the great Offenbach who directs the carousel laughing”.

Offenbach used to recommend to his interpreters not to take lyrical singing lessons so as not to alter the spontaneous and direct character of the opéra-bouffe. As in the early days of Italian comic opera in Naples, singers are above all lively character actors, capable of exhilarating improvisations. It is no coincidence that Offenbach always looked for new performers for his shows, finding them more in popular theatres and in the province than in official singing schools.
This does not mean that Offenbach’s vocality does not require an excellent technique, but this is completely different from the habits of the “belcanto”: naturalness, perfect diction, lightness, easy mimicry, vivacity in acting. All qualities that are quite distinct from the rhetoric of Italian opera, of grand-opéra and, not least, of the now “bombastic” opéra-comique. 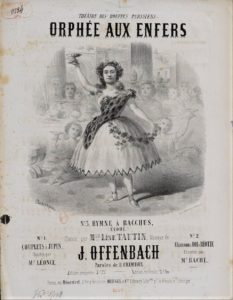 Offenbach’s style consists in constantly approaching the extremes, plunging the public into the whirlwind of the unpredictable, the surreal. The musical imitation of ancient and contemporary models reaches the most absolute mimesis. So that the parody becomes more credible than the real world to which it refers and Parisian society becomes part of the scene.
Unlike classical melodrama, text and music no longer converge, but generate, in their contrast, a sharp ironic realism. The audience is called upon to fill the illusion proposed on stage with a reference to underlying reality.
Another face of this same medal is the use of disguise. Orphée aux Enfers is just a “game of disguises”, a forcing of tradition: thus, the beginning of the work reverses the classic mutual declaration of love between Orpheus and Eurydice, overturning it into a very current marital crisis, with respective betrayals, accusations and mutual intolerance. Myth and everyday life touch each other to generate irreverent satire. 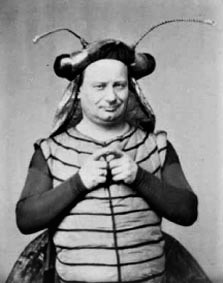 Disguise is also the debut of Aristeus, in the first act (“Moi, je suis Aristée”), all sung in “falsetto”: being already Aristeus a disguise of the god Pluto, the falsetto becomes a disguise squared.
Another example: in Act I, the revolt of the gods against Jupiter (“Aux armes! Dieux et demi-dieux”), is accompanied by a quotation from the Marseillaise, which at the time was forbidden in public executions (considered subversive, it became the national anthem only in 1879). The Olympus, therefore, lives the same feelings and passages of contemporary France! It was Jupiter himself who found the solution: a journey into the kingdom of Pluto for all the gods. The revolt subsided and life was much more attractive in the Underworld than in Olympus.

So Orphée talks about Paris as he deals with Olympus, and the stage and audience become two sides of the same coin. Francisque Sarcey, journalist of Le Figaro, describes the execution of the famous final galop (Act II, “Ce bal est original”): “At the first blow of the bow, which set in motion the gods of Olympus and the Underworld, it seemed that the crowd was shaken by a great shock and that the whole century, government institutions, customs and laws, revolved in a prodigious and universal Sarabande”.
And the critic Edmond Villetard writes in January 1865, in the Revue des Théâtres: “What was ordered to worship on the eve of the event was so often burned before us that we ended up being unable to believe any god, even those of Homer or Virgil… Since our souls were saturated by doubt and our hearts by disdain, we have developed a similar love for farce and parody“. 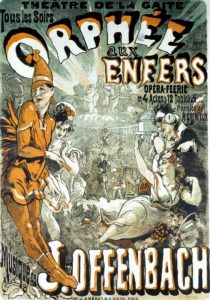 Jules Chéret’s poster for the 1874 version

Orphée aux Enfers is, of course, an “antiromantic” work. Nietzsche salutes its birth as a salutary opposition to Wagner’s theatre: “Offenbach, this spiritual and capricious satyr, who remains faithful to the great musical tradition and offers to anyone who has something beyond his ear, a real liberation, after too many sentimental musicians and after all degenerated by German romanticism”.
Offenbach had created a new musical identity, European and not only French, based on belonging to the cult of irony. From this fertile trunk will grow the branches of operetta (Viennese and Italian) and musical.
Any figures of this “orphic fever”?

About 200 performances in one year for Orphée aux Enfers. The goal of the 1000 replicas reached in October 1878: the only opera, until then, to withstand the stages uninterruptedly for twenty years.
By popular demand, in 1784, Offenbach produced a mammoth second version of the work: 4 acts, instead of two, with 42 vocal roles, 100 choristers, 9 solo dancers and 76 dancers.
It seems natural that, despite the resounding successes of subsequent compositions, Offenbach is always remembered as the “composer of the Orphée aux Enfers“.  This is also testified by his villa in Etretat, Normandy, built in 1858 and baptized, as if by chance, “Villa Orphée”.