MONTEVERDI AND L’ORFEO OF THE MYTH

Claudio Monteverdi (1567/1643) lived through the stylistic transition between the Renaissance and Baroque periods. But, even more than living it, he determines this transition: he imposed it with the authority of elegance combined with expressive intensity.
Alongside the famous polyphonic tests, condensed in the eclectic variety of his madrigals, we see him triumphantly imposing himself on history, with the creation of L’Orfeo in 1607. 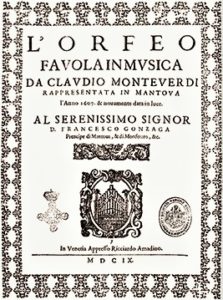 The musical period is critical: the passage from the contrapuntal perspective to the monodic one is by now irreversible and, with it, the harmonic verticalisation imposes itself as a “service” to the pre-eminence of the solo or choral voice.
Just two years earlier, in 1605, Monteverdi himself had ratified this change in the Preface to the Fifth Book of Madrigals and in a subsequent in-depth study (by his brother Giulio Cesare). The “Seconda Pratica” was born: “to ensure that the oratio is the master of harmony and does not serve”. A small phrase that will become the cornerstone in the construction of all the melodramatic masterpieces (and not only) that follow. 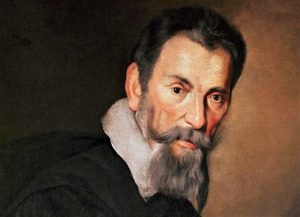 And since Claudio Monteverdi was a man of few words, but of infinite creativity, here he is immediately translating into a masterpiece the theory just exposed.
As said, L’Orfeo was born.
Represented in Mantua on February 24, 1607, with the help of the Accademia degli Invaghiti, the work obtained immediate international resonance.
Fans of the time greeted it as a precious scandal. Already amazed by the Florentine melodramatic proofs of some years before, they have here the demonstration that the Myth is, for its nature, contemporary to the sensibility of every 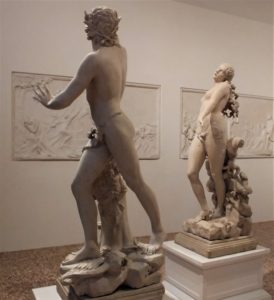 Orpheus is a figure inextricably linked to Singing. He is its superior and miraculous incarnation, beyond time and culture.
It is the natural spring of the “Seconda Pratica”, a guide to the secret intentions of the lyric.
And Monteverdi pays homage to him with a flowering of sound and dramaturgical inventions unprecedented until then, well beyond the “recitar cantando” of his contemporaries Giulio Caccini or Jacopo Peri. 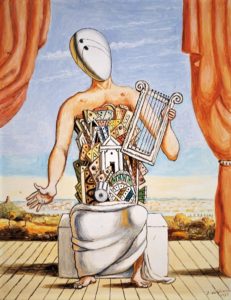 As you approach this majestic theatrical monument, you can better distinguish its precious chisels. Let’s try to catch some glimmers of such beauty. And, to remain the protagonist of the narrative, let’s consider two arias of particular charm and virtuosity: “Tu se’ morta, mia vita”, in the second act, and “Possente Spirto”, in the third act.
The two pieces are specular because they derive from the same injury: the loss of Eurydice. The first is in the form of a lament; the second, an esoteric miraculous invocation.

“Tu se’ morta, mia vita” erupts from Orpheus’ horrified bewilderment, after the long and overwhelming (even for us spectators) narration of Eurydice’s death.
A cry that leads to the crazy intention of subverting the laws of the Universe: redeemed by Orpheus’ opera, the beloved bride will be taken from the Underworld and led to “riveder le stelle”!
But what if this does not happen? What if the god Pluto was deaf to the powers of singing? Then, the poet guarantees us, even for him life would end: “rimarrò teco, in compagnia di morte”. And, before sinking into the afterlife test, Orpheus sings a sublime progression of farewell to the sensitive world, also willing to “mai più, mai più non tornare”. All in the funeral tonality of G minor, “dark side” of G major that had characterized Orpheus in the nuptial happiness of the first act.
Precisely on the last words of the aria we have the powerful description of the heroic path through the elements. A cosmic farewell, as befits a semi-divine being: “addio Terra, addio Cielo e Sole, addio!”. Here the melody draws a wide arc, first ascending to the Sun and then sinking into the final “addio”, with melody so evocative (“madrigalism”) as to drag the listener into a full physical experience.

The other aria, “Possente Spirto” is a continuation and completion of the same intentions.Orpheus sings it in front of “Caron dimonio”, the pitiless ferryman of souls.
The prayer is identical to that which each of us would express in order to revive a person loved and disappeared. The torment is the same as that of every unbridgeable loss. But how can the order of existence be revolutionized? What particular Wisdom can allow it?
This power, as Orpheus teaches, is proper only to Singing. Here is the Virtue of lyrical alchemy, that is, the true and transcendent Virtuosity.
With ingenious transparency, Monteverdi entrusts Orpheus with a melody of extraordinary difficulty, of continuous flowering and variations.
And, thanks to these superb expansions of the performing Virtues, he brings us back to the centre of the Myth.
Orpheus is a Master, founder of a generation of Heroes that includes Violetta Valéry, Don Giovanni, Otello, Serse, Rigoletto, Lucia di Lammermoor, Leonora, Mimì and countless other witnesses of the power of “lyric poetry”.

Greetings and goodbye to the next chat.
Carlo Boschi
blog@lemuse.or.jp
SUBSCRIBE to LE MUSE BLOG